Notice under section 154 of the Income-Tax Act is the rectification order issued by the Income tax department in case of mistake apparent from record.

To rectify any mistake apparent from record, Income- Tax Authority may

a) amend any order passed by it.

a) on its own motion or

c) where the authority concerned is CIT(Appeals) and mistake is brought to its notice by AO also.

Rectification u/s 154(1): After filing an income tax return the Income Tax Department processes the return and sends an intimation.

The intimation contains details of the return submitted by you and return as per Income Tax Department.

If there is a mismatch in the return i.e. a demand or higher refund than what you had claimed in the return you can do the following –

2. Agree with the demand and pay the amount of   tax.

Mistakes apparent from records which can be corrected by filing a Rectification:

Rectification can be filed for the following errors:

· An error of fact

· An error due to overlooking a non-discretionary but mandatory provision

Here are some examples of these errors/mistakes are –

Can we file a Rectification online?

Where the Income Tax Return was filed electronically, then an Online Rectification has to be filed.

Who can file the Rectification u/s154?

Rectification can be filed by you or by the Income Tax Authority on its own motion. 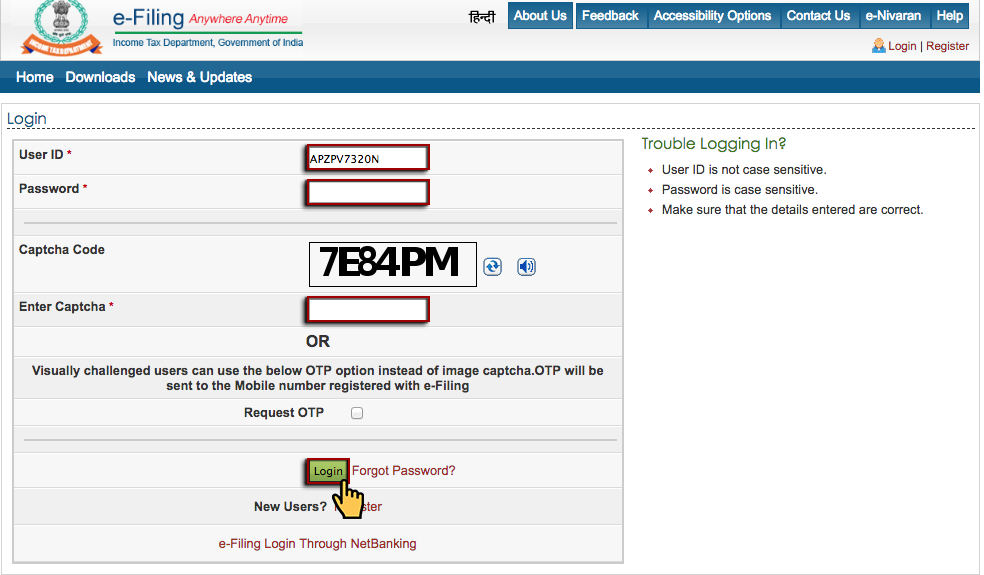 Step-2. Select the option Return to be rectified > Income Tax Return. Then select the Assessment Year for which Rectification is to be filed, enter Latest Communication Reference Number (mentioned in the CPC Order). If you have received more than 2 orders then use the latest order number.

Step-3. Validate and submit the button.

Step-4. (a) Select the “Rectification Request Type” from the dropdown list

· 'Taxpayer Correcting Data for Tax Credit mismatch only’ − After selecting this option, three check boxes, TCS, TDS, IT details are displayed. You can select the checkbox for the data which needs to be corrected. A maximum number of 10 entries for each of the selections can be added. An Income Tax Return (XML) upload is not required.

· ‘Taxpayer is correcting the Data in Rectification’ − Select the reason for making rectification, change of schedule, Donation and Capital gain details (if applicable), XML upload and Digital Signature Certificate (DSC), if available and applicable. You can choose a maximum of 4 reasons.

· ‘No further Data Correction required. Reprocess the case’ − After selecting this option, three check-boxes, Tax Credit mismatch, Gender mismatch, Tax/ Interest mismatch are displayed. You can select the check-box for which re-processing is required. Uploading of Income Tax Return is not required.

Step-4 (b) When you select the option "Taxpayer is correcting data for Tax Credit mismatch only", four check boxes will display. You can select the checkbox for the data which needs to be corrected. The details under these fields will be pre-filled. A user can add a maximum number of 10 entries for each of the

selections. Uploading of Income Tax Return is not required. After that you can enter the tax payment details correctly here.

Step- 4(c) On selecting the option “Taxpayer is correcting Data in Rectification”, select the reason for rectification.

You can choose a maximum of 4 reasons. Following are the rectification reasons you may select from: 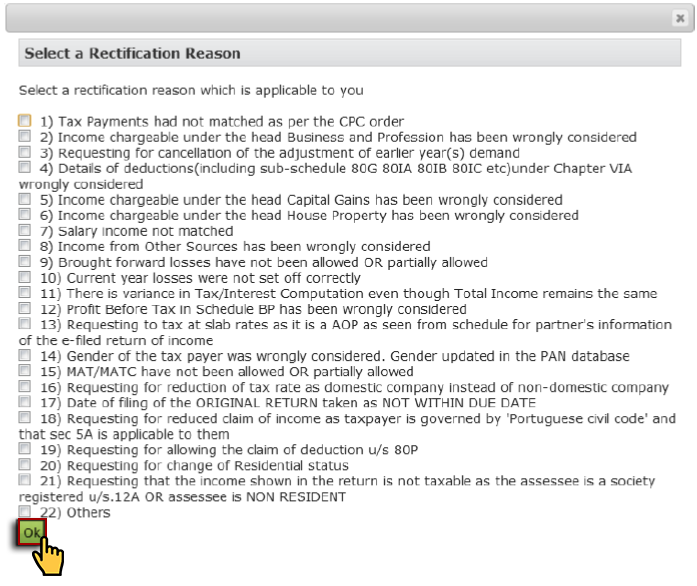 Step- 4(d) After selecting the reason you will be required to select the concerned schedules to be changed in the rectification, the Option for uploading xml and DSC (in case of audit) is also provided. 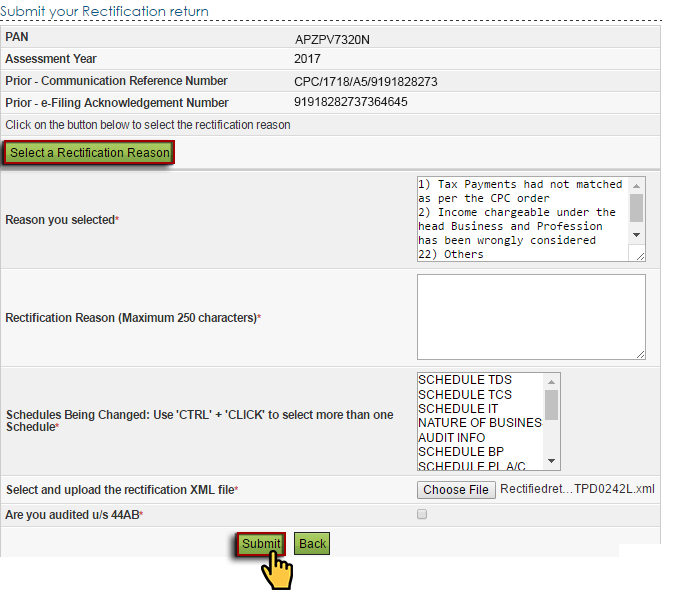 Step- 4(e) ‘No further Data Correction required. Reprocess the case’ − Select this option if there is a Tax Credit Mismatch or Tax/ Interest mismatch. You can select the checkbox for which reprocessing is required. Uploading of Income Tax Return is not required. 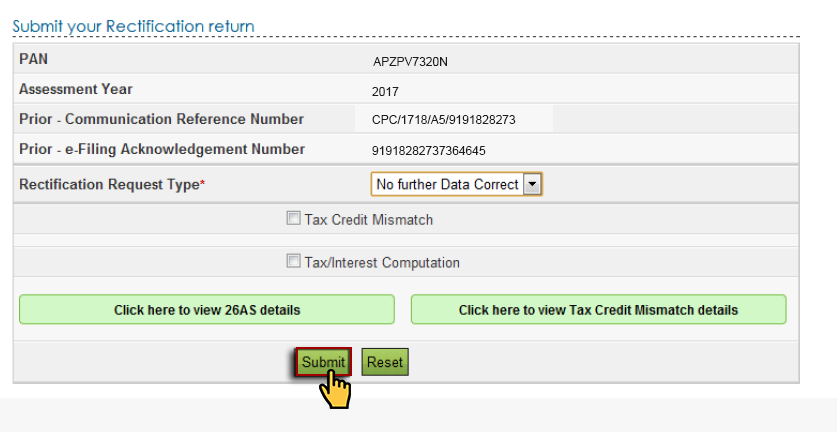 Step- 6 After clicking the ‘Submit’ button. A pop up window will appear to make sure that the TDS entries are as per Form 26AS. Click on ‘OK’.

Step 7 – On successful submission, below message will display and an Acknowledgment number will be generated and sent for processing to CPC, Bangalore.

Did you find it helpful? Yes No

Send feedback
Sorry we couldn't be helpful. Help us improve this article with your feedback.

Do you want help with your taxes?

Schedule a Call with our CA today!